It is already becoming a tradition that the Japanese pianist/composer Hiromi Uehara is spending July in Europe touring with contrabass guitarist Anthony Jackson (Paul Simon, Steely Dan, Chick Corea, The O’Jays) and drummer Simon Phillips (The Who, David Gilmour, Judas Priest, Toto, Jack Bruce). The three of them have been part of the Trio Project for the past five years. 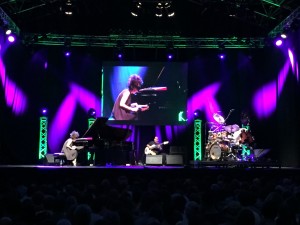 This summer the European audience will have a special treat, they will get a chance to hear some new tracks from their latest album Spark, released in April 2016.

The Tour will begin on July 2nd and the last concert will be on July 23rd. The official Tour schedule will be announced soon.

Global Artist Services will be supplying the FOH engineer and a backline tech, also, at the same time, we will be taking care of travel logistics and supplying backline.

Follow us during this Tour on our official Facebook Page where we will be keeping you updated!